I've just started trying out these guys, so I can't guarantee they're solidly reputable, but they sure do look good:  https://brandcaster.coupons.com/ .

I signed up for two "campaigns" with them.  The first creates a dynamic coupon gallery I store here: http://www.arph001.com/coupons/ .

Check these links out, and while you're there, browse through the coupons!  I'll let y'all know in a month or so if I generate any significant cash from Brandcaster, or if it only pays fractions of a penny like AdFly and LinkBucks.

Email ThisBlogThis!Share to TwitterShare to FacebookShare to Pinterest
Labels: Survive and Thrive

Another Weekend Day - Another Addition to Credit Card Debt

Gosh it's hard to get out of credit card debt!

Today was a weekend "shopping" day.  We went to Babies R Us to buy food for Dodong, stopped at T.J.Maxx to get a nice shirt for Kuya, paid for gas, then, (because Sweetie was tired to the point of exhaustion), went out for a nice dinner.  Total damage to our credit card was about $300.00.

And there was nothing extraordinary about the day!  It was just another Saturday when we decided to go shopping for some necessities, then treat a very, very tired mother to a meal out of the house.

The truth of the matter is that with our expenses, (and believe me, they could be much, much worse!), Old Grump's salary just quite isn't enough.  We're hoping later in the year, once Lola is back and Dodong is weaned, that Sweetie can get at a minimum a part time job.  Even if she only earns a few hundred dollars a month, it will at least help us pay off her sister's debts back in the Philippines.

After scrimping and saving to knock the credit card debt to a little over $1,600.00, it is now soaring back over $2,000.00 again.  Poop!!  While I know that Mr. Money Mustache would just tell me to "suck it up!", I don't have his prodigious self-discipline.  So, regarding our credit card debt, sometimes I feel like these littles guys, running and running, but getting nowhere:

Well, February was kinda more of the same of January, meaning my "income" was basically a rounding error.  Phooey!

Here is what we currently, (yeah, this includes several days in March  -  I'm late doing this, okay?),  have in our accounts that we've earned via our webpages:

AdFly  -  9¢  (The money continues to POUR in!  And to think I get billionths of a penny by forcing viewers through an irritating link!)

LinkBucks  -  NOT EVEN A PENNY YET!  (And everything I said about AdFly applies here too, only more so.)

Clickworker  -  $.10  (After signing up, and taking an English language compitency test.)


Well how about that?  In less than one hour I made more with Clickworker than AdFly and LinkBucks combined, and I didn't irritate any of my viewers by sending them to possibly virus-ridden sites by doing so.  I think it is time to kick AdFly and LinkBucks to the curb!

Okay ...... no more AdFly or LinkBucks links.  I'm too lazy to go remove all the old links at the moment, but if I ever get the time, (probably around the same time there is lasting peace in the Middle East!), I'll go do it.

If you're read some of our prior posts, you know we have some credit card debt.  No matter how we attack it, a balance always seems to stubbornly remain on our American Express credit card.  Anytime we knock it down close to zero, some new bizarre expense comes flying down from the stratosphere to land painfully on our heads.

My guess is that we're not alone, that this tends to happen to most of the rest of you too.  I guess the powers-that-be consider dealing with financial troubles good for your soul.  ("Hey, that one's getting a little uppity.  Let's zap his car!")

Be that as it may, the net result is we pay interest to American Express for the ability to spend money we don't have, (yet).  Here is how much we've spent in credit card interest last year, and so far this year:

At the risk of being rude, let me just state right now that THIS IS F@(KING STUPID!! 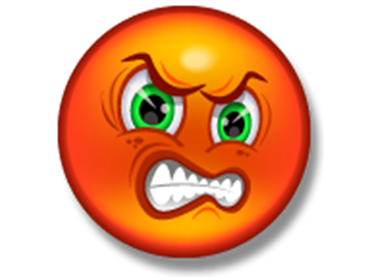 Maybe $240/year doesn't seem outrageous to you, but it should.  It is money WASTED!  It is money paid to American Express for the privilege of being financially irresponsible!

And if $240 doesn't ruffle your feathers, how about more than $400, which if we don't clean up our act is what we are on target for paying out this year?

So ..... our #1 goal of the year is to get our American Express credit card completely paid off, then not carry a balance on it again.  EVER!!

Granted, sometimes life will interfere, (sh!t happens, ya know), and we will get slapped with a true emergency.  But then our goal will revert to paying off this money-sucking leech as quickly as possible.

It's a nice thought, this "emergency fund", and maybe someday if we don't have so many unfinanced obligations and unforeseen expenses it will be useful to have one.  But for right now it is just a daydream.

If you're like me, you should cherish your job.  Embrace it; give it a great big hug!  Because for someone as unfocused as me, a job gives much appreciated structure to an otherwise unplanned, chaotic life.

I could never be like Mr. Money Mustache, and retire comfortably at age 30.  First of all, I'm in my late 50's now.  And before you suggest it, NO, this isn't sour grapes.  I know my strengths and weaknesses, and if at a young age I had been financially independent, I probably would have ruined my life with a downward spiral of self-indulgent vices.  I really like MMM's website, ( http://www.mrmoneymustache.com/ ), and try to read it daily.  You should too.  But he is a remarkably self-disciplined fellow who is putting his time to good use.  My free time tends to be spent daydreaming at best, or reinforcing bad habits at worse.

So I think it helps me as a person to have some form of discipline applied to me from an external source.  In my particular case, financial independence isn't one of  the prime goals of life, and in fact may not even be all that beneficial.

Now that doesn't mean I necessarily LIKE my job, but rather, like flossing or maintaining my car, I see it as something I have to do to stay healthy and prosperous.

A recent blog post that sums up kinda how I feel towards my job is here: http://livingafi.com/2015/02/17/i-could-quit/ .  Now with two young children I'm not in a position to quit working, at least not in the near term, but I have the same attitude towards my job the author has, namely, I can take it or leave it.  It would be nice to hang in there a few more years, particularly since I'm not completely vested in the retirement plan yet, (which is actually a matching 401K contribution), but if let go or I have a "take this job and shove it" moment, I have enough money to survive while looking for other ways to make a living.

While we're on the subject of personal finance blogs ...... I STRONGLY encourage y'all to visit http://rockstarfinance.com/ , a site put out by the wonderful J. Money, of http://www.budgetsaresexy.com/ fame.  What you will find at RockStarFinance is a collection of personal finance posts from all sorts of different blogs. Some examples of cool sites I was introduced to there:

If you go to RockStarFinance, be sure to check out the Net Worth Tracker.  We are on there!  Can you spot us?