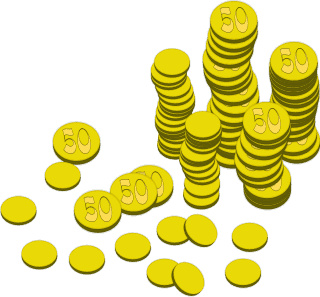 Well let's see ...... if the coins in the pic above are mostly pennies, then that may accurately reflect what we made online last month, namely $5.48.  This was entirely from Clickworker, and represents stuff mostly done last month, as I have been ignoring Clickworker in favor of promoting my Amazon store.

Yuck!  Goose eggs for our efforts.

I think the big trick to getting sales from the "Tumblr promotion technique", (
http://www.onlinedimes.com/how-make-money-on-tumblr/), is to have LOTS AND LOTS of followers.  Thousand at least; tens of thousands if you want to make the big bucks.  I spent most of the last few weeks of May, (and the first few weeks of this month), trying to build up our followers on our Tumblr accounts, arph001.tumblr.com and tea-frenzy.tumblr.com .  It looks like this may, (or may not - stay tuned!), pay off, as sales have begun to trickle in again.

The huge liability to this technique is should anything happen to our Tumblr accounts, we lose all our publicity.   :-(

In the meantime, I suppose I should go back to Clickworker every now and then, just to get some money coming in?  (Who knows - Clickworker does get tedious after a while, and the money earned isn't anything to really brag about.)