One of the main reasons we will never be rich is Old Grump's continual careless, immature, and just plain STUPID behavior. 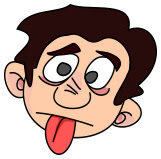 This idiocy has recently cost us nearly $500!!  Allow me to share with you the sorry details.

1. A few months ago Grump wrote a check, admittedly under duress, (it was for a product being sold through Kuya's school by a company* he doesn't like much), using the credit union account from his icky job at the Lizard Pit.  Soon thereafter he managed to get another job, enabling him to leave that miserable place.  (Hooray!!)  After waiting for all the checks from the Lizard Pit credit union to clear, he happily closed his account there.  And all was well in his world.

Except ...... he forgot to write down one or two checks, and one of these, (yep, you guessed it - to the company he dislikes anyway), got returned.  That was several months ago, and we knew nothing about it until early last week, when Grump got a letter from a collection agency** asking that payment be made for the original purchase, PLUS AN EXTRA THIRTY DOLLARS FOR BOUNCING THE CHECK.

2. As part of getting a new job, Grump got a new bank account to have his paycheck deposited into.  This new bank does some things a little differently than Grump is accustomed to.  For example, when making a payment online, this payment is not always immediately deducted from your account when sent.  Grump makes lots of payments online, and is used to checking his account online to reconcile how much money the bank says he has with how much he thinks he has, and then making any necessary adjustments in his records.

This past week, he screwed up and bounced an online payment.

What happened is that he made several online payments at once, then when he checked back a few days later saw that the bank said he had about $70 more dollars than his records indicated.  So he adjusted his balance up by $70, and went about happily spending, drawing his account down to the last penny right before his next paycheck, due on the 15th.

Of course, when the one online payment that had never posted, (for about $70!), finally showed up, (two days before he got paid, of course!), he didn't have enough money in his account to cover it, so he got whacked an extra $35 for an overdraft.

3. The final act of stupidity was a whopper!  After driving home from his job on the other side of the state, and being tired and grumpy from a persistent head cold, Grump drove out with Sweetie to get some pizza for dinner.  What happened next is so stupid you probably won't believe it: Grump got mad at his car, and broke off the turn signal / headlights lever!

As they say, as fool and his money soon go separate ways.  This little temper tantrum cost Grump $418.36!!


So in less than two weeks, a pathetic Old Grump has managed to waste nearly $500 .

It's not like we have a ton of extra cash to burn either.  We just recently had to take $2,500 out of retirement savings to help pay down some credit card bills.  Flushing another $500 down the toilet of childish behavior isn't going to help us at all.

Financial responsibility requires mature behavior.  If you want to remain an irresponsible teenager your entire life you may do so.  Just don't act surprised when you wind up broke.

* - if you really want to know, the company is Scholastic Books, who in his opinion sell a mediocre, over-priced product under the pretense of "helping your school".

** - this is the first time any of us have ever been contacted by a collection agency over an old debt.  The original check was for a grand sum of $21.00 !!

About a year and a half ago we posted an entry about our "net worth", ( http://owlsandcuckoos.blogspot.com/2015/02/our-net-worth.html ).  Rather than write another blah post about our meager online "earnings", (earnings?  hah!!), for the month, I figured now would be a good time to update those old figures.

I wish we could take credit for socking away an additional $40,000 in 18 months, but the truth is that our increase here is mostly due to the performance of our investments, and less cautious accounting on my part when determining account value.  But that's okay; and extra $40,000 is great regardless of its origin.

Well phooey!  I was hoping we had paid off more on the condo, (still owe about $47,000), and the car, (still owe about $10,000), but those debts are still huge.  And of course the never ending revolving consumer debt continues to hobble us, which wasn't helped in the least by BOTH of our boys, (Kuya and Dodong), being rushed to the emergency room recently.  But you know, it just costs money to live.  All things considered, I don't think we're doing too bad considering that we're supporting five of us.


Unfortunately, all the comments from our prior net worth post still apply.

1.  We are spending more money than we are earring.  We still cash in non-IRA savings to help pay the bills.  (Just yesterday Old Grump cashed in $2,400 to help cover a bloated Amex card bill.)

2.  The increase in our net worth seemingly occurs DESPITE our behavior, due to interest and dividends, I suppose.

This is a financially reckless way to live, as sooner or later the market will crash again, and then our redemptions will harm our principal, (or is it "principle"  -  stupid English language!), balance.


Live frugally, and may your pennies become dimes, and your dimes become dollars!


P.S.  -  I forgot to include a link to the net worth page!  Here it is:  http://rockstarfinance.com/blogger-net-worths/ .